When it comes to cooking, I love to experiment and try new things. I can be found spending entire days in the kitchen, cooking up some more or less elaborate meals for my friends, trying new things, screwing up things and fixing them again. And I’m always looking for new ideas. I spend entirely too much time pouring over tastespotting.com and various food blogs. I’ll watch cooking shows, video blogs and scour both the dark side of the Internet as well as local gardens, pastures and farmer’s markets for specialty ingredients to play with. In case you haven’t yet noticed, it’s quite an obsession.

As a result, I own very few cookbooks. The few cookbooks that I do own, though, I treasure. Mainly because they’re special, irregular and mostly a little odd.. And that leads us pretty well to the subject of today’s review: Esquire Magazine’s tribute to all things manly and cholesterol-laden in the culinary world: the very appropriately named Eat Like A Man!

In America, everything is supposedly better with the addition of bacon.. And with that, I give you Burger King’s infamous bacon sundae.. Which did not go down well on a sunny summer morning in New York City, by the way!

To rephrase: Broadly and generally speaking, everything is better with bacon.. and cheese! And this particular book, thank heavens, has a lot of both in it, and heaping quantities of a lot of other things that are bad for you and may well kill you in large quantities.

I could just say awesome and then this review would be over pretty quickly. But for the sake of rambling on, and explaining myself a little better, please allow me to elaborate:

Eat Like A Man thoroughly covers all major food groups, i.e. breakfast, lunch, dinner, sides, desserts (spoiler: in line with the generally cheeky punk ‘n’ roll theme of the book, Eat Like A Man contains a total of one dessert, very elaborately labeled “the only dessert you’ll ever need”) and drinks. And it does so in both recipes, amazing pictures and little side notes.

Within each food group category are a number of recipes from a number of America’s best chefs, all with gorgeous photos and most of them accompanied by some sort of little personal anecdote from the chef. The general theme, of course, is manly food. That is food rich in flavor, starch, fat and animal protein. 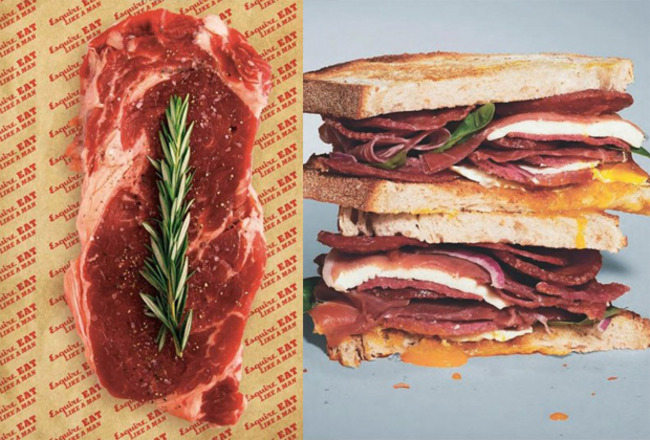 Sprinkled throughout the book, between recipes, are short stories, musings and ramblings by some of America’s top chefs including Iron Chef Mario Batali, David Chang of Momofuku fame and one of my personal heroes Wylie Dufresne of New York City’s WD-50. These musings usually center around a certain ingredient, a certain meal or the love of a certain school of cooking. Case in point: Wylie Dufresne’s piece on how to forage like a man which somehow turns into turning whatever scraps are in the pantry into a molecular gastronomy breakfast. Yes, the personality of the chefs really shine through in the recipes, the side-tracked notes and the book as a whole.

Also scattered through the book are a number of informative how-to articles such as “Things a man should know about entertaining”, “The steak information center”, “The five-minute guide to oysters” and other thoroughly entertaining and informative pieces. There’s even room for a wide bunch of classic Esquire recipes from the 50’s and 60’s – pure culinary gold for a complicated geek such as myself who gets a kick out of vintage recipes. The book not only teaches you how to cook like a man, it also shows you a thing or two about how to be a (gentle) man.

Eat, drink and be merry.. It’s a happy life this eating and behaving like a man life! A much younger Johan uncorking a 1975 Burgundy

Even if you’re not an obsessed foodie such as myself and if, as a man, you should own only one cookbook, this one’s a pretty fine contender for the spot. You’ll simply love the stuff found within its pages – both the recipes and the articles. And there’s a lot to pick from; from banana bread French toast over butter-poached bone-in top loin to truffeled macaroni and cheese and everything in between.. Steak tacos anyone? There’s hours of fun to be had just flipping pages.

Steak tacos, I call it a dinner dish. In America, they call it lunch!

Oh, and, a little pro tip, guys.. If the girls in your lives are as awesome as the girls in my life (which, I’m sorry, but they’re not, so hah!), they’ll more than likely love the recipes as well. Man food isn’t only for men anymore, y’know?

This cookbook remains one of only a handful of go-to cookbooks for me, which in my mind says a lot about the substance and the quality of the book. You should find enough substance in the book to keep you entertained (and full) for months on end. Provided that you do yourself a small favor and don’t actually eat this stuff regularly for months on end, in which case you probably wouldn’t live to savor the goodness on account of your cholesterol being through the roof.

Want it? Get it here!

Now tell me: What are your favorite cookbooks and what cookbooks should I look into, being the picky reader that I am?

Ooohkay, so. Finally got to taste the food from the hands of the amazing, talented and absolutely bonkers queen of smørrebrød @thildegilling this weekend. 😍🔥 From the everything bagel waffle with smoked fresh cheese fried in beef tallow over the most amazing herring smørrebrød and an out of this world beef tartare that tasted like deconstructed Bolognese and everything in between, the food was as unusual and amazing as the intimate surroundings at @culturetower on Knippelsbro. What a night. 🤘🏻 #copenhagenfood #smørrebrød #smorrebrod #johanjohansen #gastromand #foodiesofinstagram #instafoodies

If. But. For. One. Day. ❤️ Of all the beautiful women I’ve known in my life. I probably loved you more than most. You were you. TAK ❤️ #heroes

The search for Ramen perfection goes on and ever on… For @gastromanddk and country! 🤘🏻🔥 #ramen #chashu #japanesefood #homecooking #johanjohansen #gastromand #foodiesofinstagram