Ah French onion soup. The perfect comfort food. That piping hot mess of sweet onions, gelatinous beef broth, warming alcohol, crunchy crouton and molten cheese. In today’s installment of our Thanksgiving series, I share with you my recipe and secret tips for the perfect French onion soup. But let me first share with you the reason why my take on this classic became known as the World’s Best French Onion Soup: 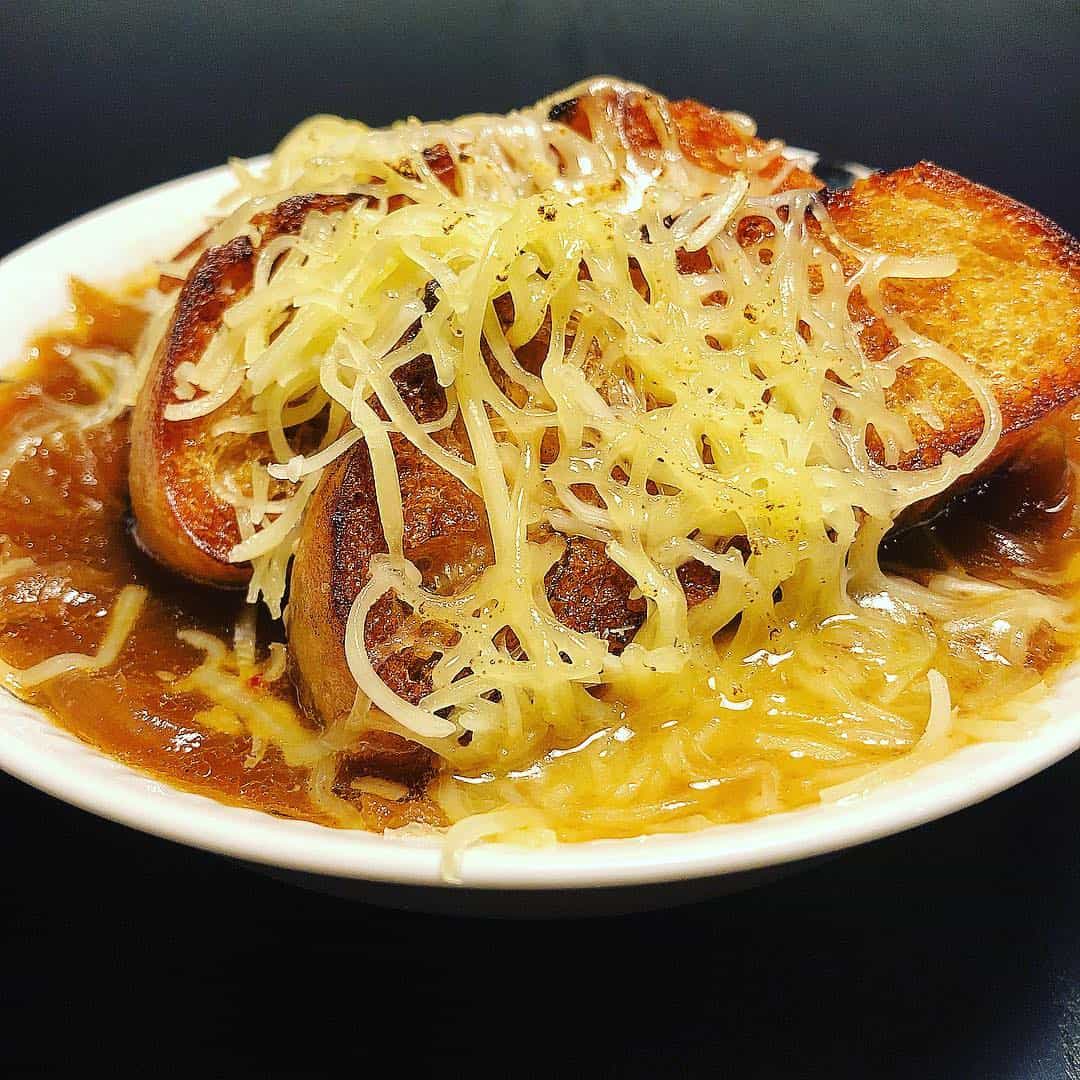 Years ago, my mom used to date a man named Klaus. Klaus was, in some ways, a peculiar fellow, but he was about as friendly as a mom’s boyfriend could be, oh and he was a trained chef who had worked in many a French kitchen over the years. He and I had some pretty good times in the kitchen, popping open a good bottle of wine, roasting some beast or fowl, geeking out over sauces and working tons of flavor into whatever dish we happened to be cooking.

As you can probably tell from the extensive use of past tense, Klaus is no longer in the picture and while things between my mom and him went sour, I still have some pretty fond memories of our kitchen sessions.

One memory in particular stands out, and it revolves around one fall evening when we were cooking birthday dinner for my mom. I’d brought a small batch of my meticulously prepared French onion soup as a starter. As I was slowly heating it up prior to serving, Klaus was hunched over the stove, sniffing, watching, eventually grabbing his tasting spoon and giving it a go.

As he did, a look of utter perplexion shot across his face followed immediately by one of happiness and immense satisfaction. “I’ve had onion soup all over the world,” he finally said, “in many of the cafés of Paris, even. And that there is without a doubt the world’s best French onion soup!”

Now, I’ve received some compliments for my cooking over the years, but nothing quite like that. Having never had the chance to travel the world, looking for onion soup in all the right places (or wrong places for that matter), I’ve no way of knowing if he was right or not. But I do know that in his own mind, Klaus believed that he was! That’s the kind of guy he was, old Klaus.

To make French onion soup, one must be willing to shed a few tears!

I’ve since spent some years and quite a few tries further perfecting my recipe and have rather cheekily served it to quite a few people under the name “The World’s Best French Onion Soup”.

Is it really that great? Like I’ve already said, I wouldn’t know. All I know is that so far I’ve received neither complaints nor lawsuits for trademark infringement. I have managed, however, to compile a very good recipe for French onion soup, one that a lot of people have asked me for over the years. And I’ve never given it to them. Until now!

Why, then, am I sharing it now? Well, I was making French onion soup for friends the other day and I was thinking to myself: “You know, I’ve learned a lot from the Internet, maybe I should start giving a few secrets back?” And you know what, dear readers; there are a lot of quick and easy French onion soup recipes out there, but not a lot of really long, geeky and complicated ones! Let’s change that, shall we?

Now, at this point, you’ve pretty much got two choices: if you simply want the recipe, jump to the bottom of this post. If you really want to know what makes my onion soup the world’s supposedly best French onion soup, then keep reading. I’ve got some secrets to share as to what I do to make my French onion soup extra special.

Secret no. 1: The perfect base recipe for French onion soup comes from an American!

That’s right, I said it. The inspiration for my French onion soup comes not from a famous French chef, but rather from a famous American chef – and a TV chef at that. Have I no shame? No, as a matter of fact, I don’t!

The inspiration for my French onion soup comes from one of my culinary heroes: fellow geek and mad food scientist: Alton Brown!

Alton, for a good ten years, hosted a little TV show that you may have heard of called “Good Eats” on which he devotes entire 30 minute episodes to a particular dish or a particular recipe. One such episode, now more than ten years old, was about French onion soup and it really taught me the basics as well as some of the tricks mentioned in this post. And more than I ever wanted to know about onions. It’s actually the recipe from this episode of Good Eats that forms the base for my French onion soup.

Where’s the link: Want to see the episode for yourself? Sure thing, thanks to a wonderful little thing called Youtube, you now can. It’s available here. If you’d rather read a transcript or the recipe, you can find it on the Good Eats Fan Page.

I call this piece: Onions + butter + time = Yum! As I said, French onion soup starts with onions. Lots of onions.

Thus, French onion soup starts with a mountain of onions (and inevitably some tears from the peeling and slicing) which is then slowly sautéed down to a largely reduced, caramelized, golden brown and delicious flavorful mess of sweet onions that is then topped with wine, beef broth and other good things to create a soup that’s really more of a thick, chunky slurry than a soup.

Low and slow is the name of the game here, along with a high onion to beef ratio.

No more tears: With onion slicing comes tears, there’s no escaping it! Over the years, I’ve seen a ton of tricks for peeling onions without tears, none of which have worked very well! The best tip I can give you is one given to me by my grandma years ago. It’s a little tip she likes to call “open the goddamn window!” Work near a window and pop it ajar so the sulfuric compounds from the onions may escape, it greatly reduces the number of tears shed. Also, when slicing a lot of onions. Get them all peeled in one go, then slice as fast as you possibly can without actually slicing into your fingers. The faster you get them into the pan, the fewer tears!

Secret no. 3: But don’t forget the beef. You need to take stock of the situation!

Now, I’ve just stated that onions are the main ingredient of French onion soup and while this is true, it doesn’t render the beef component any less important. You’ll need beef stock in your French onion soup (unless you’re vegetarian, of course!) and you’ll need a good beef broth. Stock cubes won’t cut it, various powders or concentrated fluids full of chemistry won’t cut it. You’ll be excused for using your friendly neighborhood butcher’s homemade beef broth or a top shelf, natural variety from the market, but if you really want to achieve French onion soup nirvana, you have got to make your own stock, then slowly reduce it till you’ve got a broth you’re happy with. It’s really not hard, just time consuming, and your patience will definitely be rewarded!

Want perfect soup? Then you’ve got to take stock of the situation!

I always add a healthy splash of good white wine to my French onion soup. Yes, white wine, the tannins of red wine totally kill the flavor profile (there’s an extra secret tip for you, free of charge!). I add it when the onions have nearly finished cooking. I then let it nearly boil away before adding a healthy splash of good quality French hard cider along with the beef broth and the remaining ingredients. Then, mere minutes before the soup is done, I hit it with a shot of Cognac.

Secret no. 5: Cheap Cognac is the devil!

And not just any Cognac, mind you. I know people tell you that you can use pretty much any kind of Cognac for cooking, and that I’ll sound like a total food snob for saying this but believe me, people are wrong! Use quality Cognac, it really makes a difference. Cheap Cognac is harsh and unpleasant, quality cognac is rounder and more pleasant. It makes sense to use the good stuff! Even when cooking.

When it comes to wine, people are always telling you “don’t cook with something you wouldn’t drink”, but with Cognac it’s suddenly fine? “Go on, use any kind, it won’t matter!” … Guys, really? Cognac is added near the end of the cooking process to add depth and extra flavor, so use something that you wouldn’t actually mind drinking.

Gourry de Chadeville make the best Cognacs in the world if you ask me. You don’t have to use their rare special cuvées for cooking. Though I have been known to. Cough.

You don’t need to break out the really expensive, old varieties such as VSOP, XO or better. A standard VS will do, as long as it’s from a good producer. On the topic of producers, allow me to mention Gourry de Chadeville, they make some fabulous Cognacs at surprisingly reasonable prices. I’ve actually been known to use even their top shelf stuff in some of my more extravagant culinary experiments.

VSO… WHAT? So, the Cognac grades mentioned above didn’t exactly make sense to you? Fear not, fellow food geek, check out this short article!

Secret no. 6: For French onion soup, go with Swiss cheese!

Just prior to serving, French onion soup is often placed in little ramekins or soup crocks, topped with croutons and cheese and zapped under the broiler. It’s a ritualistic, hedonistic and damn good tradition!

For this final step, you can use pretty much any cheese you like as long as it has character and taste. I personally have tried many cheeses for my French onion soup, but I keep coming back to Swiss cheese – more specifically a good, cave-aged Gruyère. To me, it’s the essence of French onion soup and really adds the essential salty, nutty and creamy notes that the soup so begs for. Other good choices include French Comté or possibly Danish Vesterhavsost, even. Use whatever you prefer and whatever makes you happy – as long as it’s Gruyère!

Oh and since you’ve already invested so much time and money in this project, get your cheese at the cheese monger, the extra money is really well spent!

Wait, you mean that sounds complicated? Trust me, it’s really not THAT complicated, as illustrated by the recipe below. All you’ve got to do is pick out the best possible ingredients and allow at least a few hours for the cooking process. If you want to go all in (and you should), you can make your own beef stock for the recipe. Use your favorite recipe – or this one – and allow an extra six or so hours.

The finished soup. It’s literally one of the best things in the world!

This recipe can be made well in advance and even freezes quite well, so make it when you’ve got the time to spare and make more than you think you need.