Ever since I cut my hair and traded most of my band shirts for work shirts, very few people look at me and go: “there goes a metal head!” In fact, very few readers of this blog, save those who know me or those who read my review of Iron Maiden’s The Trooper Beer, would probably suspect that I really am a major metalhead. But there. It’s out there. I am. I listen to metal much every day: heavy metal, thrash metal, , death metal, progressive metal, progressive death metal… whatever suits the mood!

I’m not telling you this to freak you out or make you go “Run away! It’s the Satanic food blogger!”, I’m merely trying to make a transition into telling why I’ve been taking some time off from blogging to spend a few wonderful days at one of the most wonderful places on earth: Copenhell! Denmark’s largest metal festival where 15,000 metalheads bump heads (not literally) for some glorious days of sunshine, junk food, beers, blood, guts, glory and heavy fucking metal! 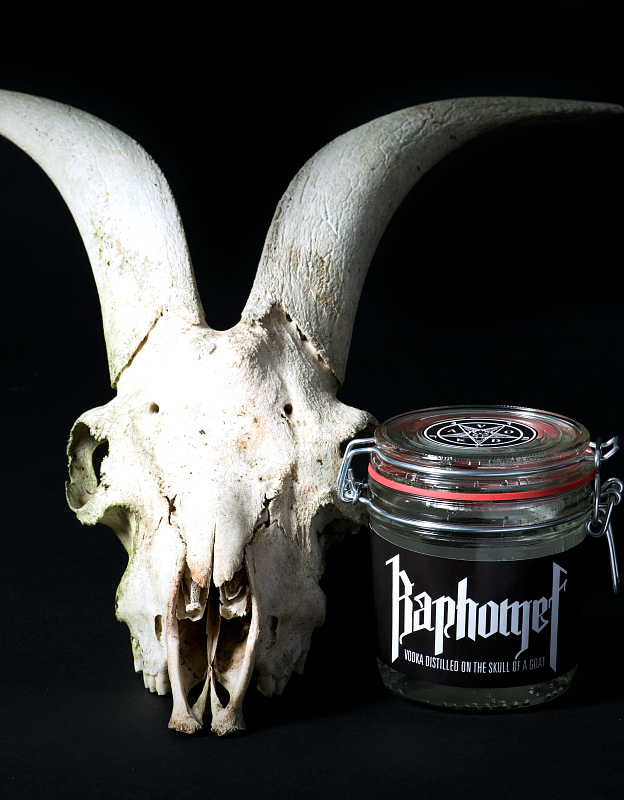 Wait, did I say take a break from blogging? Uh, well, let’s call it a pseudo-break. Because while most of my goals at the festival centered around having fun with friends, letting go and seeing the likes of Iron Maiden. Behemoth, Twisted Sister (go on, laugh, they were awesome!) and Anthrax, I also had one major food and drink related goal; trying the “official” Copenhell vodka, the unlikely devil spawn that is BAPHOMET!

What is Baphomet, you say?

Baphomet is a single-batch vodka produced by world-famous brew master and now also distiller Mikkel “Mikkeller” Borg Bjergsø, head of Denmark’s most iconic, most rebellious and most far-out-there brewery: Mikkeller.

Baphomet was produced exclusively for the Copenhell Festival as well as for Mikkellers own webshop, and it comes off as a Witches Brew dictated by Satan himself:

Brewed and distilled in a process that took exactly 66.6 days and packing a punch of a whopping 66.6% ABV(!), Baphomet is a clear vodka made from local grain, secret herbs and then distilled on a goat’s skull! That’s right, the sick motherf*ckers went and threw an actual goat’s skull in the pot during the distillation process. I’m not kidding. I wish I were, but I’m not!

Baphomet was produced in only 300 hand-numbered 500 millilitre mason jars, some of which were put up for sale on the web, while the rest were offered up from Mikkeller’s bar stand at Copenhell to daring and/or courageously drunk festival goers. And one of those daring festival goers who got to sip from the limited supply of goat’s skull vodka was going yours truly.

The “real” Baphomet? Baphomet was originally a name used to describe an idol or deity supposedly worshipped by the Knight’s Templar (or so the Church wants us to think). Since 1856 the name Baphomet has been associated with an iconic image of Sabbatic goat (pic) drawn by Eliphas Lévi and meant to picture the total sum of the universe… But later on also with Satanism as the imagery was very famously adopted by Anton LaVey’s Church of Satan. Steeped in mystery and Satanism, Baphomet probably seemed as good a name as any for Mikkeller’s vodka.

Being the seasoned food and drink scout that I am, I had noticed the Mikkeller bar on the very first day of the festival, but it wasn’t till the second day I’d amassed the courage to step up and place an order… Hah, who am I kidding? We all know by now, I’m pretty fearless when it comes to food and drink. I’d just been busy the day before, headbanging to Anthrax, Iron Maiden and other such things.

Still, though, on the second day, it was a mix of excitement and trepidation I approached Mikkellers festival bar with my crew, new-found friends and random curious onlookers in tow. And why wouldn’t I feel some sort of trepidation? As we approached, the bar towered above us a large, foreboding, all-black, tree structure, covered in blood-red writing. It stood a black monolith, largely closed off from the sunny outside world by tall, dark walls with only a few little openings to allow the few and daring to slip into the darkness and consume their devil drink in the cool, dark shade.

Outside look at the Mikkeller Bar at Copenhell – Looks welcoming, right?

For those brave enough to enter and dance with the devil, Baphomet was available in two incarnations: Straight up for the terminally stupid, i.e. your reporter in the field, or in the appropriately named and presumably more stomach-able “Baphomet’s Real Bloody Mary”, a standard Bloody Mary made using a very non-standard vodka and sporting an equally non-standard garnish of a cherry tomato, dill pickle and  raw bacon.

Thinking I’d well and truly take one for the team, I ordered both versions in the sincere hope I’d live to tell the tale.

Baphomet Vodka straight up: Dancing with the Devil

At this point, you may be wondering: just what goes through your head when you’re about to sip a goat’s skull vodka… The answer? Pretty much the same thing as the first time you notice the “worm” swimming in the bottle of Mezcal you’re about to drink from. What, you haven’t been there? Well, in that case, something along the lines of: “Oh, wow, this is going to be weird… let’s DO this!”

And with that, I tilted my head back and had my first sip of the  infamous vodka, straight up and untamed:

Let it be known from the very start, this billy goat packs a punch. If you have a cold, I’d seriously recommend this as a magical cure all, it’ll blow your sinuses clear out and clear all airways in the process. As you sip, the alcohol blasts straight up your nose and blasts your throat in an instant. But strangely enough, it’s not an altogether unpleasant experience. It’s quick, brisk sucker punch of heat, but not a nasty, uncomfortable, prolonged burn as you get with so many other spirits. Your old high school buddy, Smirnoff, actually has much more of a burn to it than this vodka from Hell.

And what’s even stranger is that a second after the initial onslaught, you’re left with nothing but a crisp, clean and surprisingly mellow, warming sensation and a strangely refreshing and enjoyable subtle aftertaste with some light herbal and floral tones to it. Baphomet is something as rare as an over the top, yet sipable premium quality vodka, with a sharp devilish punch to it, but a strangely pleasant aftertaste. It’s also a vodka thought up by a complete sadist and wrapped perfectly for the Copenhell experience.

I’m shocked to say I actually quite enjoyed this 66.6% Hell ride. Baphomet is definitely not for everybody, but such is the case for most premium vodkas. They’re clear, odorless and pack a punch, but bring only very subtle flavors to the party, if any. And as such, Baphomet fits the bill perfectly, only it packs more punch than most!

Mixing it up: Baphomet’s Bloody Mary

Now, as we’ve just established, a premium vodka should bring very little flavor to the party which probably explains why vodka is such a popular mixer. Still, with the pretty ridiculously high alcohol by volume of Mikkeller’s Baphomet, I thought mixing it would not only be hard, but also spell disaster for the Bloody Mary.

But for the second time an equal amount of minutes, Baphomet proved me wrong. When sipping it in its Bloody Mary form, I was not only surprised to find the drink surprisingly sweet, I was also surprised to find pretty much no trace what so ever of the vodka in the taste. Now, granted, this wasn’t my first drink of the day, but still, I’m pretty sure I’d have been able to trace an overpowering vodka note even in a drink as sweet as this… Which leads me to conclude that Baphomet (like revenge) is probably a drink best served cold and neat, because a boy could get hurt mixing this stuff.

But how was the Bloody Mary, you ask? Well, it was a brilliant thirst quencher on a hot summer’s day, I’ll give it that much! Sweet, refreshing, dangerously alcoholic! I, for one, would have loved for it to pack a little more punch, though. A bit of pepper, a bit of spice, more tabasco, a little more burn from the alcohol. Well, no strike that large part. It was nice and smooth, but it could have used a little more kick.

The garnishes? Well, uh, I think I ended up eating the tomato, the pickle I’m not sure I ever really understood in relation to the sweet drink and the bacon I tossed because, well, raw meat served up at mid day at a summer festival kinda scared me, much more so than Baphomet himself.

Having tried both incarnations of Baphomet in the comforting shade of the Mikkeller Bar, I ventured outside with my crew and new-found friends to reflect on what had just hit me.

What happens after one too many Baphomets? The Leprechaun shows up!

The sun really helped the sweet Bloody Mary go down and as it did, and I chatted with my friends, I came to the realization that Baphomet while probably the most sinister looking kid in the class, was actually a pleasant, enjoyable and happy acquaintance. Much like the 15,000 or so sinister looking metal heads scattered throughout the festival grounds, by the way. How’s that for symbolism.

Oh, and no, I hate to disappoint you, but you couldn’t taste the goat skull, sorry guys! All you got was good, clean, crisp vodka flavor and a sucker punch of alcohol. But on a hot summer’s day, that was good enough for me.

Want it? Think you’ve got what it takes to dance with the devil? While stock lasts, Baphomet is available from Mikkellers webshop. At DKK 349 (or a set of two for DKK 666), it’s hardly cheap. But then again, i seriously doubt that Danish-made, craft spirits with heart and soul poured into them will ever be cheap. Get it for the vanity “bottle”, the sheer outrageousness of the concept or to own a piece of heavy metal history. You can get equally awesome vodkas for a smaller price, but probably none as original Mikkeller’s Baphomet.

2 thoughts on “Review: Baphomet Vodka, Dancing with the Devil at Copenhell”

Two years ago, a teary-eyed Johan snapped this image at Brasserie Les Halles in NYC. The loss is still unfathomable and so very real. You inspired me to write. I owe it all to you. Hero. ❤️ #anthonybourdain #ripanthonybourdain #hero #johanjohansen #gastromand #foodbloggerlife

You know what? I’m actually sort of over grilled meat for the time being... 😂 Watch out for a review of the Charbroil 4500 Professional Black Editon on a leading Danish food blog near you soon! 🔥 #flæsketar #mixedgrill #grilling #porkchops #sausagefest #johanjohansen #gastromand #foodbloggerlife

Ya, so, I’m the sort of person who eats confit de canard at the height of Danish summer... It’s not a crime, people! 🤓 #confitdecanard #duck #summerfood #johanjohansen #gastromand #brorditlev #comfortfood #slicetown